skip to main | skip to sidebar

Free money is everywhere and every time a sure way to waste money in the most ludicrous ways.

Often this is only pathetic without causing serious damage to the economy. For instance when Brussels pays you to keep your pony paddock or when you no longer need even to pretend to grow olives; you simply have to show that you have title to the land and that you are keeping it in good nick, olives or no olives.

French farmers used to be the champions when it came to exploit the madness of government subsidies, but they are now being surpassed by the German producers of the so-called renewable energy (mostly wind and solar power).

Some years ago Germany established by law a ‘feed-in tariff,’ which obligated private utilities to buy renewable electricity from private producers at prices up to seven times higher than the market price and make their ratepayers pay for it (other countries like Portugal followed with similar measures). Some years after the German government imposed a moratorium on building nuclear power plants (one of the cheapest producers of electricity, see the table below) and ordered the existing ones – which produced 25 percent of the country’s electricity – decommissioned by the year 2021. The annual cost of this madness costs German taxpayers more than 17 billion Euros, this is an amount equivalent to more than 10% of the entire European Union annual budget). 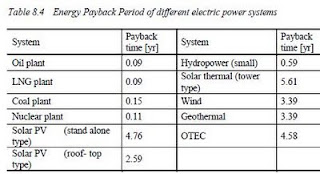 To understand why this is economic madness you just need to consider this example. Imagine that a firm has two power plants, one powered by wind and the other by oil. The first has fixed costs of 40 cents per Kwh and zero variable costs. The second has 10 cents in fixed costs and 5 cents in variable costs. In a free market firms would build a second fuel-powered plant and decommission the wind-powered plant. But this not so as long as the government pays them a subsidy or lets them charge a tariff high enough to make the wind-power profitable. Now the firm’s optimal mix in terms of the two technologies will depend on the vagaries of the government policy not on the economics of the most efficient technology.

Unfortunately the madness of this policy is not an exclusive of the rich Germans. The debt-laden Portuguese responded to the recent rise in imported energy prices by switching to a similar energy policy and they have even overtaken Germany. Portugal now gets 53% of its electricity from renewable sources. The bad news is that it costs them 3 or 4 times more than conventional sources (at their current high level). Not a rational move, is it?

Posted by Antonio Marques Mendes at 08:09

This is a bilingual (Portuguese/English) blog with my personal observations on the six pillars for the good of humanity. Your thoughts on this theme expressed as comments to my posts are most welcome.