skip to main | skip to sidebar

Why the IMF therapy is not working in Greece 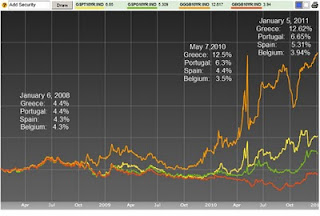 The main role of IMF-sponsored adjustment programs is to facilitate a normal access of the borrowing countries to external markets. With the CDSs on Greek debt at 11% (above those of Venezuela) and yields on 10-year debt higher than they were before the IMF program (see chart above) the failure of the program is unquestionable.

One of the reasons why markets do not believe that Greece will be able to avoid defaulting, is probably due to the fact that the IMF approach can only use one of the three tools of their standard treatment - fiscal and budgetary policy. With Greece being a member of the Euro-zone, the other two - monetary and exchange rate policy are not available unless Greece is forced out of the Euro.

Unfortunately, the IMF has no experience of dealing with balance of payment adjustments within monetary unions. Moreover, even in relation to budgetary policy, the IMF does not realize that Greece (like Portugal and Spain) has an economic system based on state capitalism. Thus, unless they starve the Greeks (in a Ceausescu experiment) it will not be possible to achieve an external balance without destroying the state capitalism system, which the Greeks are not willing to do.

Thus the only three alternatives for Greece (and to Portugal, who is trying to mimic an IMF program without the IMF) are: a) to force a significant hair-cut on its bond-holders, b) to receive a major grant from other EU countries, or c) a mix of both. None of these is a pleasant solution but there is no other way out.

Posted by Antonio Marques Mendes at 09:47

This is a bilingual (Portuguese/English) blog with my personal observations on the six pillars for the good of humanity. Your thoughts on this theme expressed as comments to my posts are most welcome.